It is not yet clear who might replace the current IEBC Wafula Chebukati due to the petitions yet to be determined. Since August 8th elections, the rift between the two separate groups within IEBC has been widening. 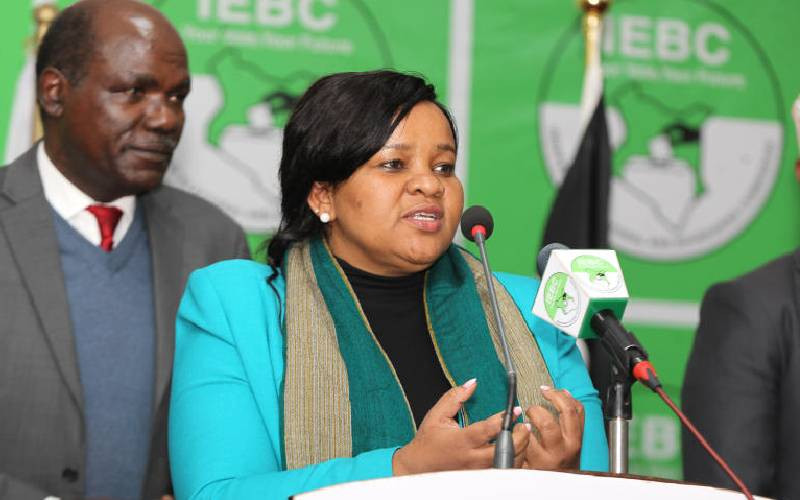 It is not yet clear who might replace the current IEBC Wafula Chebukati due to the petitions yet to be determined. Since August 8th elections, the rift between the two separate groups within IEBC has been widening.

"The petitioner should tell us who Juliana Cherere is... we don't have such an Employee in IEBC" -- Lawyer Apollo Mboya

On Thursday 24, Azimio members stormed out of Cherera 4 IEBC Commissioners hearing in Parliament.

The four IEBC commissioners led by vice chairperson Juliana Cherera and members; Irene Masit, Francis Wanderi and Justus Nyang'aya have resurfaced with a message alleging why they choose not to attend the hearing of the petition that's was purported to kick them out of office for misconduct during the August presidential election.

Speaking via a report covered by the Standard, the four undisputable commissioners now alleges that the national assembly justice and legal affairs committee lacked jurisdiction to hear petition on ouster.

" The Committee lacks Jurisdiction to hear the petition on ouster", they revealed.

The petitioners argue that the four IEBC commissioners went against the official position of the IEBC on presidential election results amounting to what they refer to as gross misconduct and violation of constitution.

Their lawyers as well termed the process as unconstitutional alleging that their clients enjoyed immunity as public officers hugely turning their backs away from the National Assembly Justice and Legal Affairs Committee ( JLAC).

lawyer Jonathan Orwa who represented Justus Nyang'aya however reinstalled that Committee of privilege alongside that of parliament that deals with conduct of members and not the branded ' JLAC'.

It should be noted that according to the law, the four commissioners can only be ejected from office if they are physical or mental incapacity, they're incompetent or seriously violate the Constitution.

How To Lose Belly Fat, Easy Tips For A Flatter Stomach